We are thrilled to welcome A.U.R.A as the newest member of our Cosmic Dreamer family. A.U.R.A is the solo project of New Zealand born singer-songwriter and multi-instrumentalist Albert Mikołaj. “An aura is the subtle body that surrounds something, which conceptually is how I feel about my music,” Mikołaj explains. At age 19, Mikolaj travelled to Argentina in a quest to delve into his spirituality, and it was there that the foundation of A.U.R.A was formed. The ideas that were born in Buenos Aires feature thematically throughout Mikołaj’s future work, Anima Rising (2013), Conference of the Birds (2015), and Tender Rage (2016). Albert’s once stripped back acoustic guitar and vocals have organically evolved into grandiose sonic textures while maintaining the pastoral folk roots of his mindful songwriting.

A.U.R.A’s upcoming work Secret Intelligent Light, produced by Ben Lemi of French for Rabbits, is due for release via Cosmic Dreamer in 2018. The album draws inspiration from David Lynch’s philosophy, which explores and engages the use of dreams as a means for catching ideas. Secret Intelligent Light explores themes of ethereal light, primal birth and androgyny, and is, according to Mikołaj,“a humble attempt to mine at the truth.” 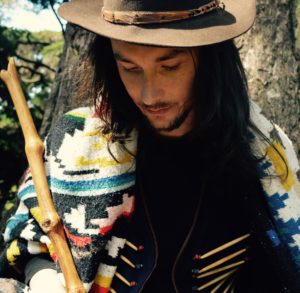 Watch him cover “Strong & Wrong” by one of his greatest heroines Joni Mitchell below.