Post-Trash just premiered Hospital Ships David Bowie cover of, “We are the Dead”, from Volume 3 of our Limited Edition series. This is what they had to say on the release:

David Bowie’s sensual rock classic Diamond Dogs may have been released in 1974, but just like Bowie’s seemingly endless career could attest, it sounds more vital now than ever. Maybe this is why Cosmic Dreamer curated a recent 7” between Jordan Geiger’s Hospital Ships, The Dan Ryan, and visual artist Veronica De Jesus celebrating Bowie’s songwriting in all of its versatile and timeless glory. While The Dan Ryan pays homage with a lovely Kinks-indebted cover of the early Bowie gem “In the Heat of the Morning,” it’s Hospital Ships’ cover of the typically slinky and seductive “We Are the Dead” that seems to announce itself as something different entirely. Bending the glam-rock edges of this Bowie deep cut, Hospital Ships reimagine the stutter and strut of the original for an introverted and caustic synth fete. Oddly enough despite the corrosive sounding mechanics of the song and the bruised vocal performance, the Ships somehow manage to make this song shine in much the same way that Bowie did: through sheer wit and imagination. 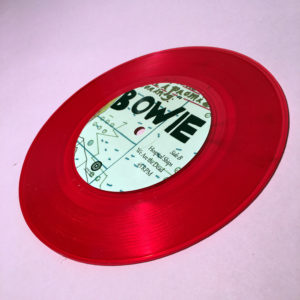 Limited Edition Volume 3 is a tribute to the music and iconography of David Bowie from both a sonic and a visual perspective. De Jesus’ drawing for this Limited Edition is the last work she completed for her Memorial Drawing series, and its release coincides with the UC Berkeley Art Museum’s presentation of De Jesus’ drawings. Created between 2004 and 2016 the Memorial Drawings commemorate the lives of artists, writers, activists and other individuals who were an inspiration to De Jesus.Each limited edition includes a 7” record pressed on transparent red vinyl, a signed and numbered print, a download code, a postcard containing thoughts from both the visual artist and musicians as well as a certificate of authenticity all packaged together in a hand silkscreened and numbered die cut sleeve. These are limited to an edition of 200 and can be ordered here.